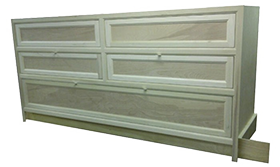 My oldest son, a cabinet-maker, custom designed and built a cabinet for a customer, who is a contractor and also refers work to him. The customer gave guidance on the specifications. They agreed on a price and within a couple of weeks the item was built and delivered. Then came what often happens with construction.  The customer wasn’t happy. Discussions began.

In this case, drawers designed to open and close with specified slides were noisier than the customer wanted. He asked my son to install different (and more costly) slides to reduce the noise. My son thought the customer had specified this design and that the drawers were quiet already. So, he did not think any change was needed.

Has this ever happened to you? Think about fee disputes, for example.  Here are approaches some people take:

My son agonized for more than a week over what to do. He did not want to spend the time or money replacing the slides because he thought he had done everything right.  Yet, he valued his relationship with the customer.

While he appeared to ignore the issue for a short time, he opted for a different approach, which looked a lot like applying the Trust Principles, elaborated on in more detail in Trust-Based Selling by Charles H. Green.

My son then suggested a way to compromise, sharing responsibility for the costs and time involved in fixing the problem.  After a brief discussion, they reached a resolution.

How many times do we choose to ignore, get angry or give in, rather than face the issue head on, using a principled approach? Which works better?